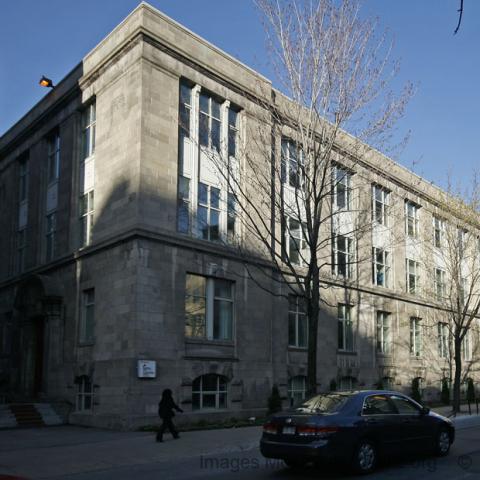 On Friday, Vijay, Aaron and Micah came by my office for the McGexplo. We were a bit strapped for time because the Annual March for Missing and Murdered Women was happening that eve and we all wanted to go, which only left us about 45 minutes or so to do a quick look around one of the buildings.
After weighing our options, Vijay and Aaron seemed to agree on a destination (I wasn't really listening) and we headed out, walking crossing Sherbrooke on University, intent on walking a ways to our (to me at least) mysterious destination.
As soon as we crossed the street however and walked past the Otto Chemistry Building, Aaron spotted the door to the Pulp and Paper Research Lab and made a comment about that might be a cool spot to check out at some point. Well, no time like the present! Or, as Hubbs from 80s metal homage film the Stoned Age would say, "you gotta jump on the grenade." So in we went and jumped on that grenade.
According to the McGill website, the Pulp and Paper building was "built in 1927 by Percy Nobbs, Professor of Design at the School of Architecture at the time, this building has long been home to the Pulp and Paper Research Centre. Many fine discoveries have been made in this building, including a means for mass producing artificial vanillin flavouring, found in many food products today." And verily, as I would soon find out, many fine discoveries would indeed be made in this building over the course of our little exploration...
As soon as we crossed the threshold, we had two options, to go up a slight flight of stairs, and past the custodian who was cleaning the floor and just now looking at us, or convincingly downstairs to the lab areas. The key in these things is to act with full confidence, so we headed down, past the lab door into the pulp and paper labs to have an exploration altogether different from last last week's adventure in the Arts Building where at every turn we had been thwarted by locked doors upon locked doors.

The first thing we saw in the basement was an empty expanse of hallway lined by laboratories filled with incredible looking equipment.

The doors were locked and we kept walking, past another door into a suite of offices and smaller labs - and this time, were granted full access to explore to our leisure. We had a chance to get a first-hand look at some very impressive technology - including a chemical mixing station and a spiny thing that was spinning whatever was inside it.  Neat!

Outside of that first lab, we found ourselves into a squarish office area, made all the more awesome by the shoulder-height red canisters of chemicals just outside the door we had come in.

The staff had left for the evening but I was impressed with the 'open-concept' desk layout and the impressive stocks of both chemicals in rows and rows of plastic bottles as well as other rows and rows of plastic equipment with which to conduct scientific experiments.  Mika noticed that someone had left their glasses and we hoped that they'd be ok without them during the weekend.
On our way out, investigating a loud electric humming, I came across a store room filled with what I can only assume is an epic industrial-strength fan. I was impressed and pointed it out to the other fellows, who disappointingly, didn't seem to care as much.
Past the open-concept office, there was another long hallway at the end of which was an unlocked storage closet filled with large plastic drums labeled 'waste chemicals'. Yikes! And down the hallway, a chemical emergency shower.

I was certainly glad that in due conscience we were adhering to the cardinal rules of urban exploration: 1. to not touch or take anything and 2. to not open anything that's locked.
Past the emergency shower, we came out of another long white expanse of hallway. In the middle of it, Micah noticed a secret door without a handle. The door was clearly there, but there was no way to open it - no keycard scanner, no door-knob, nothing. Clearly whatever lies behind that door is awesome or dangerous or both. Probably both.

Past the awesome-dangerous door, we found ourselves in a flight of emergency stairs. In McGexplo, when in doubt, head down! So down we went where we found a tantalizing but un-openable floor grate (too bad) and a door to the McGill garage.
Ever wonder where all those sweet little McGill-branded cars go to rest in the evening?

To the McGill garage, of course, where we also saw what Vijay qualified as a video-game quality fan. I pictured a skin-of-your-teeth zombie escape through the fan before it starts back up, saving your life by decapitating some zombs.

Exploring the garage, we got access to an unlocked storage room, unremarkable and filled with spools of cable except that in its furthermost corner, Aaron spotted a ladder leading up to a door. Tantalizing much? Heading up, he saw that this led into one of McGill's legendary steam tunnels.

The legends were true! Vijay and I headed up to check things out and it looked like it might be feasible to squeeze through. However, without working flashlights and with now only a few minutes before we had to leave for the March, we decided to push back this exploration to another time.
We found our way out of the garage, emerging on the lower-campus side of the Otto building. Vijay headed north and Aaron, Micah and I headed East towards the March.

All photos by Vijay.