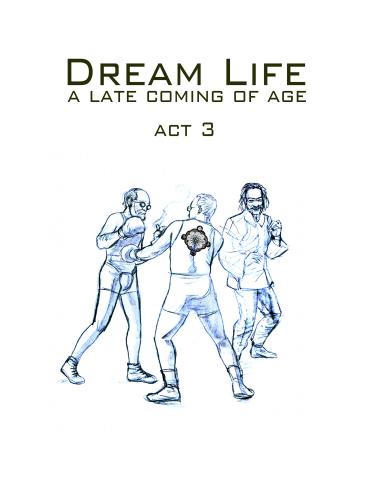 My friend (and Montreal artist) Salgood Sam has a new graphic novel coming out. It's a coming of age story called Dream Life and it looks amazing. Even more awesome (to me) is the fact that I make a brief, cameo appearance in the book.

Salgood Sam was nominated “Best Emerging Talent” for the 2005 Doug Wright Awards for his RevolveR anthology. He is the artist for the 2007 book Therefore Repent! with collaborator Jim Monroe, and has worked in the Eisner winning anthologies Comic Book Tattoo, Popgun 4, and in Awesome 2: Awesomer.

Dream Life, has earned him a nomination for Outstanding Web Comics Creator in the 2011 Joe Shuster Awards.

Charlie’s childhood friend is about to die.
Hitchhiking in BC PJ’s luck runs out.
Lionel is in crisis, time for love?
Leslie is a therapist and part time drug dealer.
It’s just occurring to her she hates her job.
Dan’s 6 year old daughter thinks he needs to grow up.
She may have a point.

Support the tour via kickstarter and grab yourself a copy.