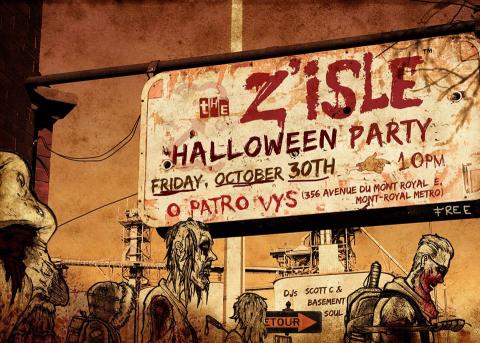 Zombies and zombie-fighters are called to face off, dance off, and party at Ô Patro Vys this Friday, October 30. The Z'Isle team launches the 4th issue of their serial comic, which takes place seven years after an apocalypse, in Montreal, affectionately known as Z'Isle. It features what's left of local architecture, innovative social organization, and maybe your friends. With local and federal politics on my mind, I asked co-writer and illustrator Lateef Martin to tell us more about this possible (zombie-filled) future because I still love this comic:

Leah Garfield-Wright: In this apocalypse, how do you picture the candidates for PM of Canada faring? Who is most likely to show up?

Lateef Martin: Thomas Mulcair seems like an gruff dude. I think he'd survive, but as a loner in Outremont. He'd have an intricate network of traps and would have a good base of operations. Elizabeth May would shack up with anarchist greenroofers in the Plateau. Stephen Harper would have figured out how to blend in with the undead, to the point of eating people. He ends up eating everyone he knows. It's clear that at some point he lost sight of reality and just got stuck in character. Justin Trudeau would be the leader of a cult that idolizes him. It's full of people from all walks of life and skill, but as much as they try to stay positive and inclusive, there are deeper problems within this cult that they ignore. One day it may implode.

LGW: Will the tanneries of Saint Henri ever come alive again?

LM: Most definitely. All sorts of furry animals are game now. The distinction between house pet and wild animal no longer exists as food is harder to come by. Everything is used.

LGW: We're not sure yet if the Saint Lawrence will be flooded with untreated sewage...yuck. How will the Z'Islanders handle this?

LM: They build their own water filters since everything has been either shut down, destroyed beyond repair or too complex for anyone alive to figure it out.

LGW: What's the second best Halloween Party (on the 31st)?

LM: The Rocky Horror Picture Show Halloween Ball! I was part of the cast for over seven years, They're a fantastic crew and always bring it up another level every year. The only reason I can't join in the debaucherous fun is because I'm working on Z'Isle.

There will be a video game demo, door prizes, costume contests, and other surprises. Costumes are not mandatory, and it's free. 10 pm at Ô Patro Vys (365 Mont Royal Avenue East). Check out the facebook event page.