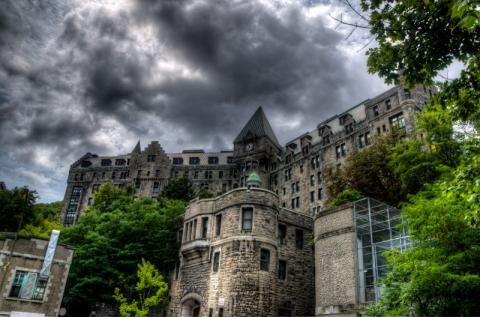 So after work, we met at the Roddick Gates, as we are wont to do. I had texted Andrea to specifically request that she not try to sneak up on me and scare me because she did it this one time and man, did I jump. So Andrea came and met up and we chit-chatted about what to check out and then decided, hey, let's go check out the Royal Vic - given that it's about to get torn down and replaced by gawd knows what.

So we texted Alissa and she was in and we decided to meet halfway up University.

On the way, we started to talk about how Andrea was just coming from a work pizza party and how there was still pizza there and we could stop and get some. But for some reason we got our wires crossed and Andrea thought we meant let's go later on and we thought we were heading over now, and by the time we straightened it out, we were on University, on our way to meet Alissa and we had no pizza. Such is life.

We kept walking up as a posse and got the the hospital but then Alissa had to bail because her back was hurting. So we picked a random side door and went inside. 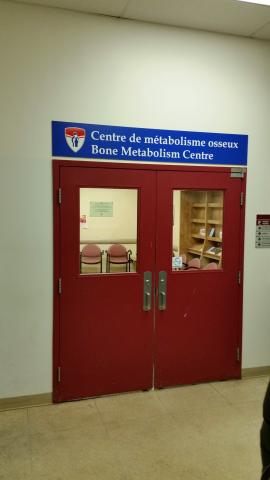 All the doors a the Royal Vic are maroon. Is it because: McGill? This is where we could go in. Apparently bone metabolism science isn't too in demand on a Friday eve at 6pm because no-one was around. 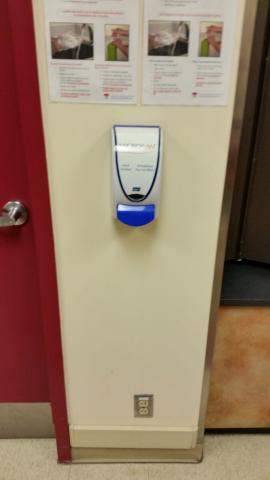 Dutifully, we disinfected our hands before proceeding. 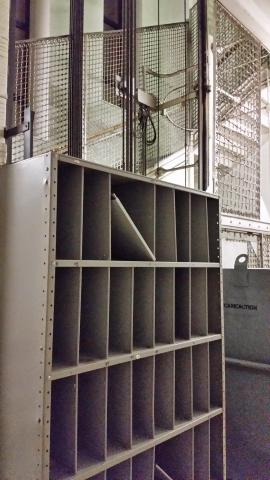 We explored randomly, going around corridors and it was all a bit oh-hum but then we went through an exit and found this kinda awesome zone of metal. So. Much. Metal. An open elevator shaft made of metal. Empty shelves made of metal. A staircase going up to other floors, encased in metal meshing. 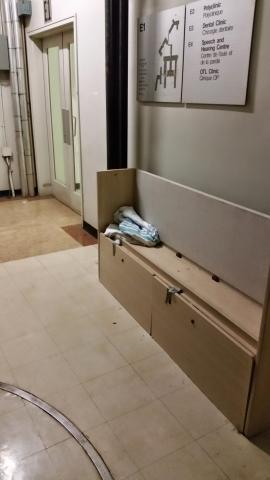 And oposite the metal stuff there was a small bench with a blanket that somehow looked to us like a baby. But it really wasn't. 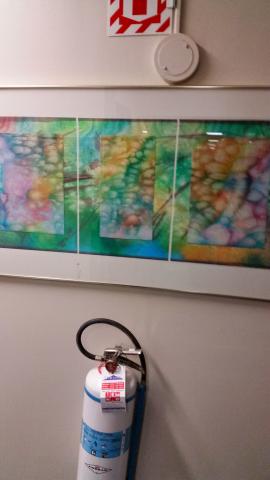 We went up a flight of stairs and there were moar hallways. Cept this time, there was art in the hallways. Like this little pastel number! 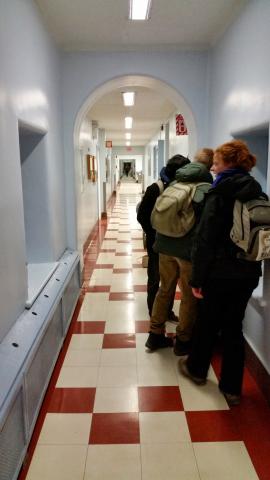 This is an example of the hallways we were in. Some nice arches, and powder-blue. It was about that time that we decided that we would limit our explorations to non-patient areas. 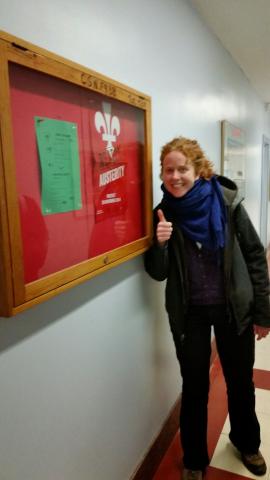 Apparently, there are some folks at the hospital that are totally not down with austerity budgeting. Right on, Royal Vic folks! 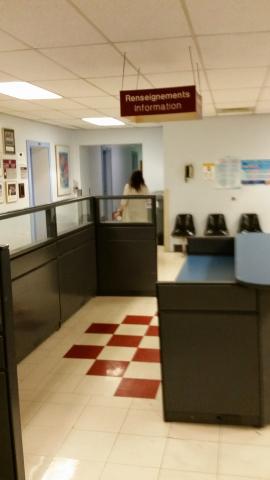 This was an info desk. And again, totes empty. Go figure. 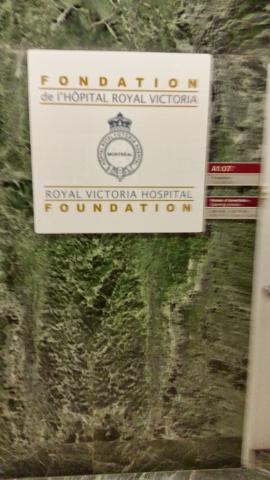 We went back down after a while and found an other area dedicated to the Royal Vic Hospital Foundation. And as you know, where there's foundations, there's philanthropic cocktail benefits. So we went looking for the cocktails. 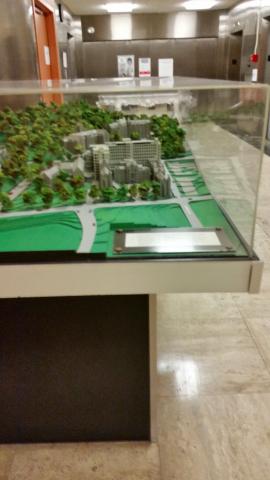 And found this instead! A to-scale (we assume) map of the hospital! 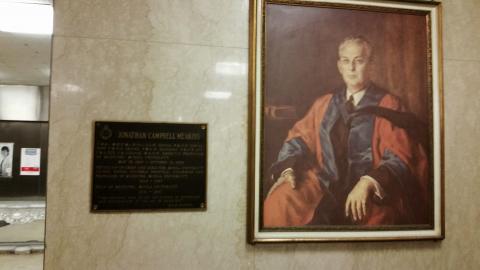 And also a painting of this handsome Captain of Industry. 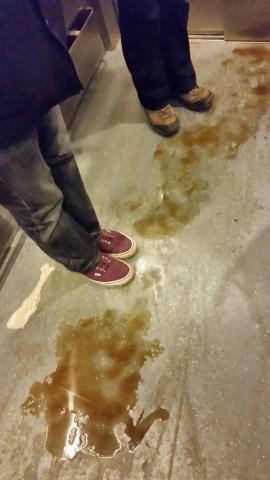 We took the elevator up and found the biggest coffee mess that no-one had bothered to clean up after they spilled their own coffee. For shame. 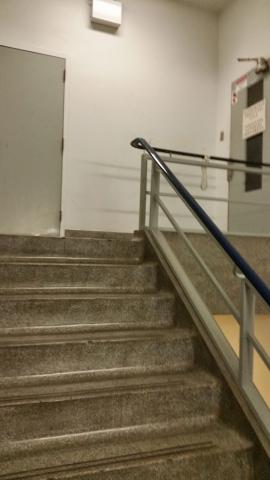 We kept going up, because that's the most important thing, and at the top of the stairs, we found an interesting door, which was... locked.

So down we went again, finding ourselves in a lab-ish area. 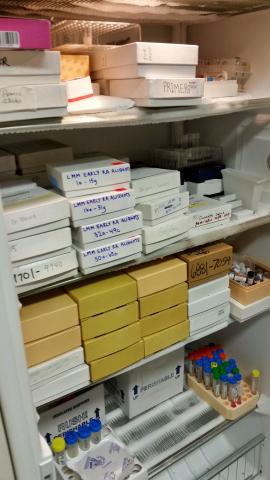 As we have seen in the past, lab areas are kinda interesting. They're always filled with refrigerators filled with this kind of stuff. Test tubes! Little boxes! Undoubtedly all part of medical experiments which we left alone. 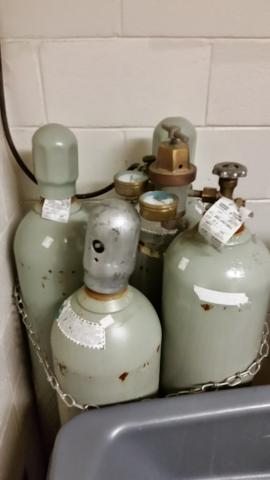 And also gaz canisters secured in place by the flimsiest chain in the history of chains. 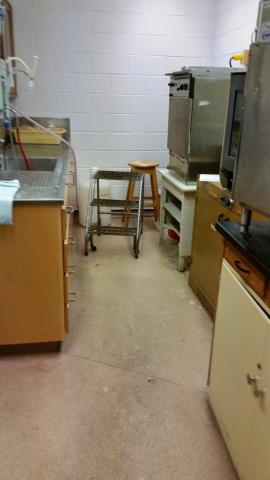 Some random office. And for what it's worth, if you're getting the impression that this wasn't the most exciting of McGill Explorations, well you're right. We were kinda feeling it. There was a sense of slight alarm as we pointed stuff that was relatively humdrum. 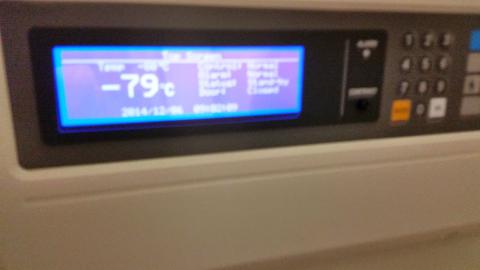 Another insanely cold refrigerating unit! What COULD be in there? Who knows? 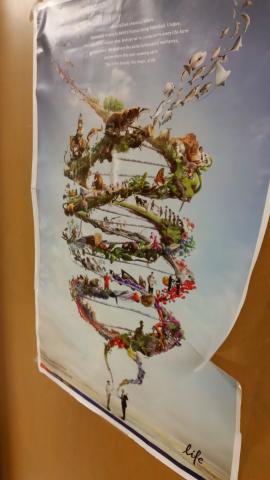 VIjay and Andrea found a weird DNA poster. It's friends hanging out and from them, there is a DNA helix comprised of all of the animals in the world! 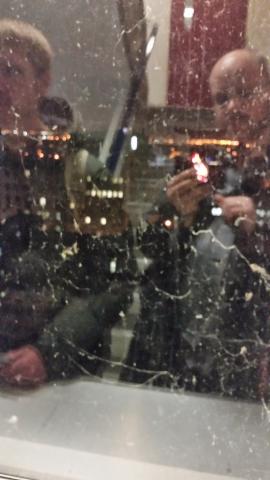 Coming out of the research area, we found this incredibly dirty windown. If only it had been clean, we would have had a great view of downtown Montreal. 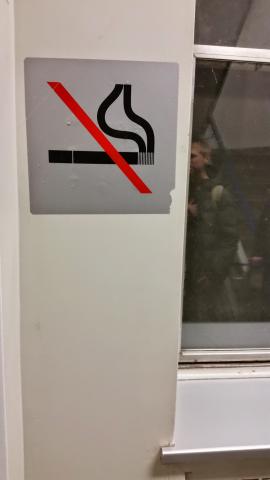 And a no-smoking sign! Are there still people who think it's ok to smoke in hospitals? And why did someone apparently try and pull it off? 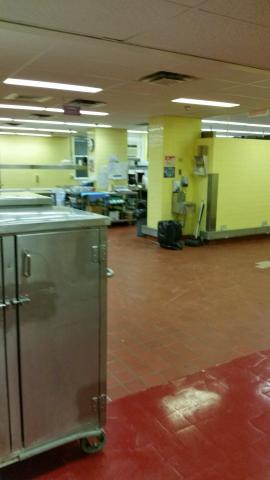 We found the hospital kitchen. It looked like no-one was there, so we figured, let's have a look and we ignored the sign telling us not to look. Vijay and I went in and walked around cautiously. It was huge and spotless clean and there was an interesting section that looked like a large open shower area. But then a staff person saw us and was very helpful and asked what we wanted and we fibbed a bit about being lost looking for the washroom. So we went back the way we'd come. 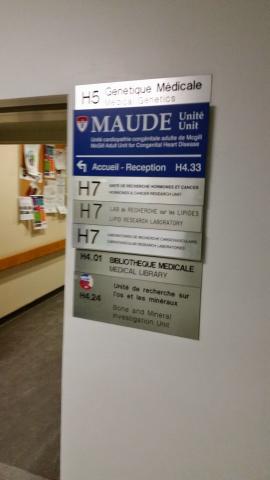 We found a wing called the Maude Unit which is the McGill Adult  Unit for Congenital Heart Disease Excellence - which really spells MAUCHDE. But tha's not as catchy as MAUDE, is it? 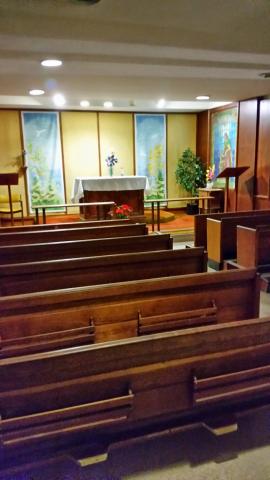 And then Chris spotted the Royal Vic chapel! This was definitely the highlight of the exploration. 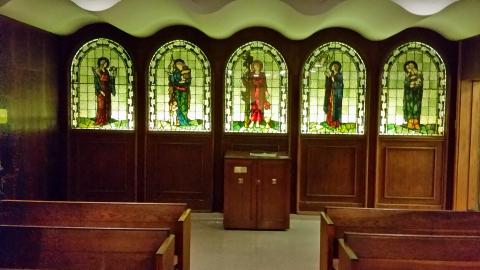 Such a small, serene beautiful chapel! with stained glass and wooden pews. 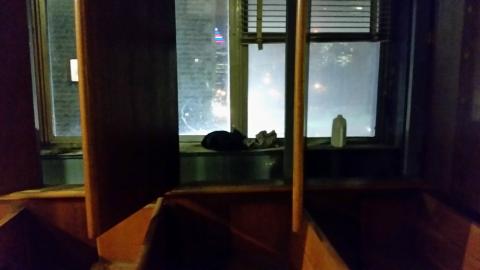 Wooden paneling covered the windows. In between the two, someone had left a carton of milk and a bunched up sweather which Andrea thought looked like a sleeping cat. 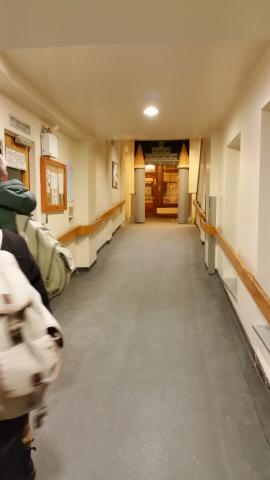 We left the chapel and headed down this other hallway towards the Royal Vic library where the entryway looks like a castle! 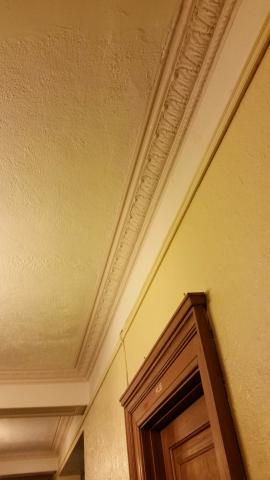 And about then, the whole look of the place started to shift and it became less hospital-ish and more McGill-ish, with wooden doors, and adorned ceiling borders. 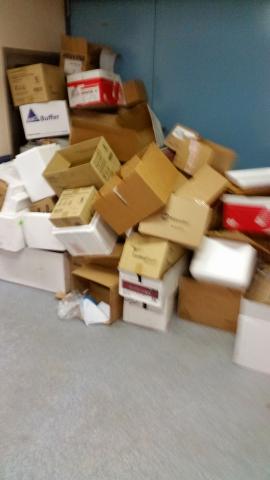 We went down a flight of stairs, past a holiday party of celebrating nursing staff and found ourselves in an area filled with boxes. We were saying that our cats would have a field day here, but then noticed that there were alarming signs on the doors, indicating that maybe we were in the animal testing unit of the Royal Vic. That really depressed us - given that some research since, shows the extent to which animal research is still going on at McGill. 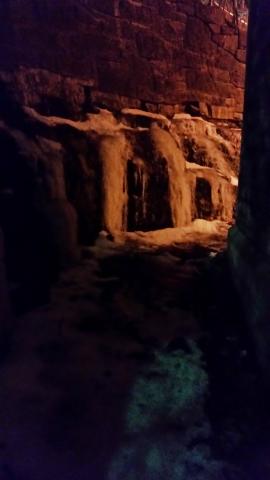 So we left and found ourselves in the back of the building. We tracked around and the four of us hiked the mountains towards respective parties.

Not the greatest McGill exploration, but then again, they can't all be winners, can they?