My crushes on rogues: Talisman of Death 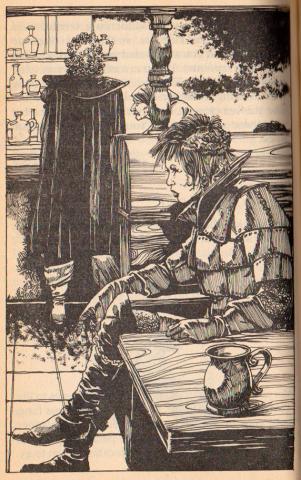 In classic Dungeons and Dragons, you have the Fighter, the Magic User, the Cleric and the Thief.

Fighters fight. They are decked out in armor, have sharp weapons and know how to use them. If there's a problem, yo, I'll solve it. Check out the hook while my DJ revolves it. Except that in this case, the hooks are not musical or metaphorical. They are dangerously sharp pointy hooks wielded by capable warriors.  If Dungeons and Dragons was a university, the Fighter would be a football jock, a beer bro. That's the Fighter in a nutshell.

Magic Users cast spells. They wear robes and are intriguing and mystikal. They have a magical staff or a magical wand and if you hit them they usually go down. Hard. So they stay in the rear with the gear and they cast fireball spells. That's magic users.

Clerics are the most boring of all. No-one ever wants to be a cleric. Anyone who's ever played a cleric is someone's younger sister or someone who's been promised a ride to a concert or convention or best friend points. In Dungeons and Dragons they tried to make clerics more fun by giving them ok fighting skills except that they can't use swords. The only reason clerics are around is to cast healing spells. That's it.

The thieves though, no-one really knows why they're around and half the time it sorta feels like a mistake to have brought one along.

My first crush on rogues was through Jamie Thomson and Mark Smith's Talisman of Death choose-your-own-adventure book.

In it, you play the part of a real-day person, sucked into the magical world of Orb in order to prevent the forces of evil from getting their hands on the Talisman of Death and thus bring about Armageddon. It's epic, fast-paced fantasy, beautifully illustrated by Bob Harvey and much of it takes place in the streets of Greyguild-on-the-Moor, a sprawling fantasy city filled with well-described factions, all with a particular vested interest in the conflict that's playing out. I read the book when I was 7 or 8 and found the book, and particularly the descriptions of the fantasy city, absolutely riveting.  But what I loved most about the book was the rogues.

Being that this was the early 80s and that choose-your-own-adventure books were targeted primarily at a 10-15 demographic, the character you got to play was pretty much your standard do-gooder. You were on an epic quest granted to you by the gods, you had a sword, Evil was coming after you, etc.

At one point in the story, you lose the Talisman and eventually find your way to a kindly sage, Apothecus, who tells you that the Talisman is now in the hands of Hawkana, high-priestess of Fell-Kyrinla, an evil godess and to get it back, you need to get help from the thieves' guild.
Getting to the thieves' guild was a process in and of itself, taking you to the Red Dragon Inn on the streets of the seven sins, where a group of thugs eventually direct you to the thieves' guild by way of a coal-hole in Hornbeam Road. They leave and before you can do likewise, you get to meet two other thieves who walk in and confront you: the tall, brooding, armored Cassandra and Tiutchev, a worshipper of a chaos god. You can either fight them or talk your way out of the encounter but either way, you come across the two thieves later on in the book - this time with their illusionist friend Thaum - and potentially in Way of the Tiger, another series of choose-your-own-adventure books written by Thomson and Smith also set in the world of Orb.
Later, at the thieves' guild, you meet Vagrant, the guild-master in their opulent hall. Vagrant agrees to help you get the Talisman back. Bloodheart, Jemmy the Rat and Lord Min are assigned to accompany you to the temple. They help you get in but then their dubious morals kick in. At one point, you can prevent Lord Min from murdering an old man before he can raise the alarm. Later, in the fight with Hawkana, the thieves scatter, leaving you to deal with her alone. As you make your escape with the talisman, one of the thieves, Bloodheart, turns on you and tries to knife you to death.
So yeah, that was my introduction to rogues. While the book's protagonist was dead set on saving the world, thieves were in it for themselves and while they might be relied upon to help out once in awhile, you just never knew when they'd turn on you. I was hooked.
Later, when I got into Star Wars, I was way more into the bounty hunters and the smugglers than the Jedis. Not just Han Solo mind you, but the whole thing. I couldn't care less about Yoda, I loved Jabba and his nefarious empire, I loved the fact that Bobba Fett was in it for the money. But I especially loved that with rogues, you just never never know what's going to happen.
When I was ten years old or so, I got into roleplaying games - first through L'Oeuil Noir, a translation of Ulrich Kiesow's Das Schwarze Auge published in french by Gallimard who back then were also doing the french translations of the Jackson-Livingstone Choose-your-own-adventure books - and then eventually through classic red box Dungeons and Dragons.

More often than not, I'd dungeon master the games but when I could play, I'd usually play a rogue. Either a straight out thief or someone with a fair-sized helping of nefariousness. It just felt more... fun.