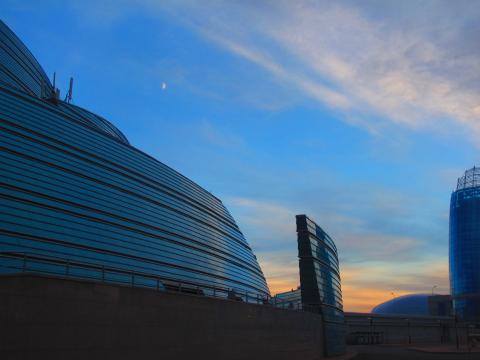 So it’s been a little while since my last update out here in Central Asia.

I’ve been busy carrying out collective works and interviews out in the village and in general savouring the moments in the apple orchard, the snow-capped Ala-Too mountains beyond and going for walks on the steppe passing only the nomads on horseback rallying their flocks in the late afternoon.

After being in Kyrgyzstan for 60 days, I had to step out of the country to re-enter to stay for longer. The nearest neighbour that is easiest to travel to is the giant and largely unknown country of Kazakhstan.

After having an epic conversation with an American couchsurfer and a French couple that began with the hospitality and incredible friendliness of Iranians to foreigners, the state of the world, about whether to have children or not (in that order)…I made my way to the Kazakh border quite late in the day. The border itself involved much pushing and shoving and waiting. I made a mental note to avoid crossing borders in Central Asia again at night if at all possible.

On the other side, it began to snow and after a 4 hour journey, I arrived to the city of Almaty (pronounced Alma’ta) and met a couchsurfer from Turkey and her friends who later took me out to a rock club full of badass looking Russians and women dancing on the table top. We stayed til 4am and I woke up as a zombie at 7am since my host had to leave for work quite early.

Similar to the Kyrgyz capital, Almaty is a Soviet-built city that has grown economically and is visibly more capitalistic and much larger than Bishkek. It’s quite a leafy city, full of broad avenues. I quickly noticed the city had a strange colour scheme of grey, olive green, navy blue and brownish- giving it a sort of classy, sophisticated look. Even the sparrows that flitted between the now bare trees donned the same palette. Another thing I noticed were the people. Yes, we know Montréal folk are known to be amongst the most beautiful, but Kazakhs put the rest of the world to shame. Straight jet black or brown hair, Turkish faces, tall Russian bodies, mild Asian eyes- a very interesting confluence of cultures in the centre of the world’s largest landmass. I wanted so much to take photos, but walking up to a random person to ask for a photo of their face would be creepy to say the least. Still, if someone could capture the diverse faces of Central Asia, it would be fascinating.

The lack of sleep combined with a change of setting made time feel slower in my mind. This was massively reinforced by my trip to the space station Kazakh capital to the north. Looking out across the steppe that spans the 700+ kilometers to Astana could be described as an ocean of land…flat with short grass punctuated by little ridges and crests across 360 degrees to the horizon. The bus into Astana had me with my jaw open out the window. From empty steppe, appeared a sparkly Emerald-City type metropolis with few glazed-eyed model-appearing inhabitants fueled by massive amounts of (petro) wealth. As I came to discover in my time there, the folk were not very friendly and it was very hard to communicate with anyone, even on a rudimentary level which was definitely a shame because I had so many questions.

The 1.5 days I was in the city might have well lasted a month. I had that feeling that one gets sometimes when you open your eyes when diving or snorkeling in the ocean and look out into the blue depths that extend beyond the edge of the reef or even within a swimming pool as a kid looking out into the deep end of the pool…that feeling of vastness, fear and the unknown hit me several times in Astana when glazing around the corner at the view of the city in front of me. Of course, the fierce sub-zero wind gusts might have influenced the feeling as well. The facades of half of the city buildings at night were on weird light patterns that changed patterns like a Windows screensaver. There was a giant opera/ballet house with massive doric-like columns at least 2 times bigger than anything one could see in Rome. Then there was the giant transparent tent shaped half-empty shopping mall with a water park at the tip of the tent. Other bizarre formations included: 1) a pyramid with white painted doves on blue glass…perfectly symmetrical with diagonal lifts that glide you up to the pyramid’s apex; 2) a skyscraper that turned into a Chinese pagoda at the top; 3) an emerald green set of buildings that flipped out at the top like the pages of a book; 4) an inverted, elliptical bowl-like building in blue glass with an inverted roof; 5) a lollypop structure with a golden orb at the top. 6) A road of gigantic and empty restaurants shaped as famous monuments of the country's cuisine they offered. (the 'Turkish' restaurant was a giant Blue Mosque that could have housed an easy 100,000 and 30,000 servers +chefs to feed them).  7) shopping mall food courts full of fried chicken (and nothing else).

In my dazed tired stupor at night, I also stepped right onto a sewer hole with a very flimsy metal lid that went tumbling into the hole as I walked past and almost sent me flying (or falling) into the hole. They say the city was built very fast...

The next day I returned to Almaty…explored the fascinating 'Зеленый базар'  full of pickled mushrooms and cabbage, balls of fermented hard cheese, pomegranates, dried fruit and nuts, honey with propolis and sweet halwa. Later on I met up with some of the new Kazakh buds I made from the previous night out.

Heading back to the peace of my Kyrgyz village in the morning. A normal day on the steppe is full of extremes, spanning temperatures, vast distance and as I’ve come to discover…time. 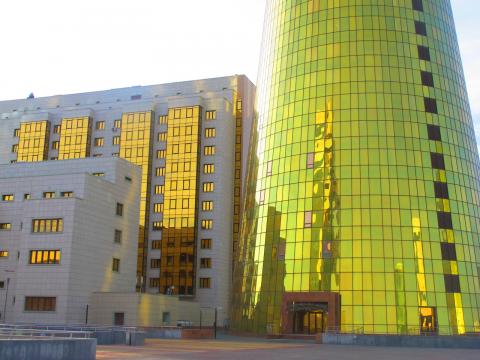