Rob Ford, crack use and racism 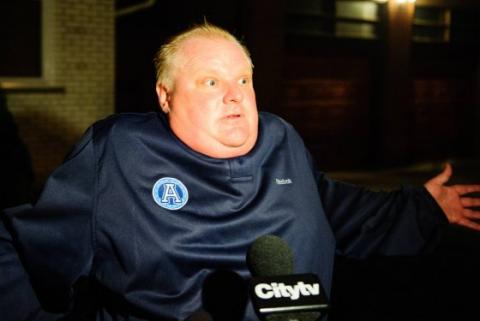 This Jacobin article effectively highlights some of the racially problematic aspects of the Rob Ford crack-use coverage. While the Toronto Mayor's admission to smoking crack cocaine is vastly significant in light of the rapidly diminishing legitimacy of rule in Toronto and the overarching series of problems facing municipal politics, there are racial issues at play in the way in which the coverage has emerged which need to be acknowledged. From the article:

But there are broader questions in play here. The situation is actually deeply symbolic, involving a city with a high minority population in a country with a huge white majority, a drug that has always been cast as a drug of the underclass, and a mayor whose oafish and exaggerated behavior has frequently been called “low class” – a reputation now combining uncomfortably with the cultural assumptions about the people who smoke crack cocaine.

As Cook and Gawker have repeatedly noted, it is, indeed, a big deal that the mayor of a major metropolis is doing something illegal, and particularly when that something illegal is using drugs, a subject which always captures the public attention. But this story has attracted a particular kind of attention – a particularly prurient atmosphere of scandal – due to the fact that Ford used crack, a drug that is typically associated with the black underclass. Ford is not the drug-using mayor. He is the crack-smoking mayor, and the difference matters.